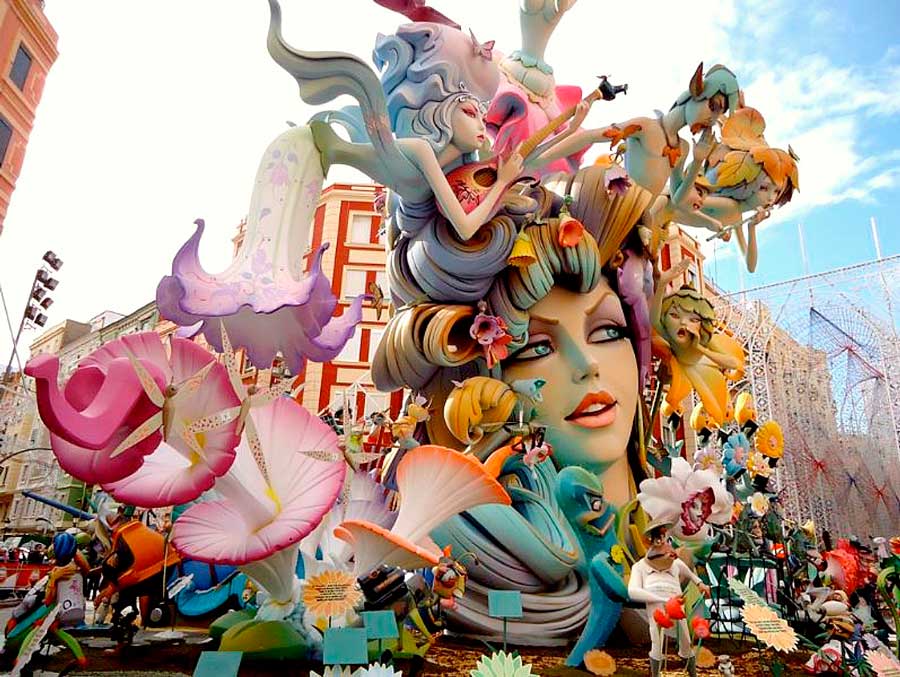 The Fallas fiestas are probably the most spectacular fiestas when it comes to fire and fireworks. The nearest town to Javea to hold these fiestas is Denia, but the main Fallas is held in Valencia.
The Fallas is the name given to the fiesta and also to the monuments or effigies that are burnt during the celebration. These monuments can be several stories high and depict scenes with buildings, people and animals and are extremely ornate and to a first time visitor you cannot believe that they would set fire to such works of art.
In the past, these gigantic satirical constructions were made of cardboard or paper mache. As more innovative materials are available the Fallas have been modernised and are covered with materials such as polystyrene or moulded composite materials.
Fallas is an extremely important fiesta in the Valencia region. It honours St. Joseph the patron saint of carpenters. There are different suggestions regarding the origin of the Fallas festival. One of which is that it started in the Middle Ages, when carpenters disposed of the broken artefacts and pieces of wood they saved during the winter by burning them to celebrate the coming of spring. Valencian carpenters used planks of wood called parots to hang their candles on during the winter, as these were needed to provide light to work by. With the coming of the spring, they were no longer necessary, so they were burned. Over time, and probably to do with the church the burnings took place to coincide with the celebration of the festival of Saint Joseph, the patron saint of carpenters.
The biggest celebration of the Fallas is in the city of Valencia from 15th to the 19th March. During this period there are fireworks, music, traditional parades and a fallas being displayed on every corner. Everyday at 2pm a mascleta is set off, many rows of fire crackers that sounds like the loudest and longest crack of thunder you have ever heard and is described as “terremoto” which translates to earthquake! This is not for those with sensitive ears and small children.
You will need to plan and book in advance if you want to stay in Valencia for this fiesta as hordes of people descend on the city for this spectacular event.